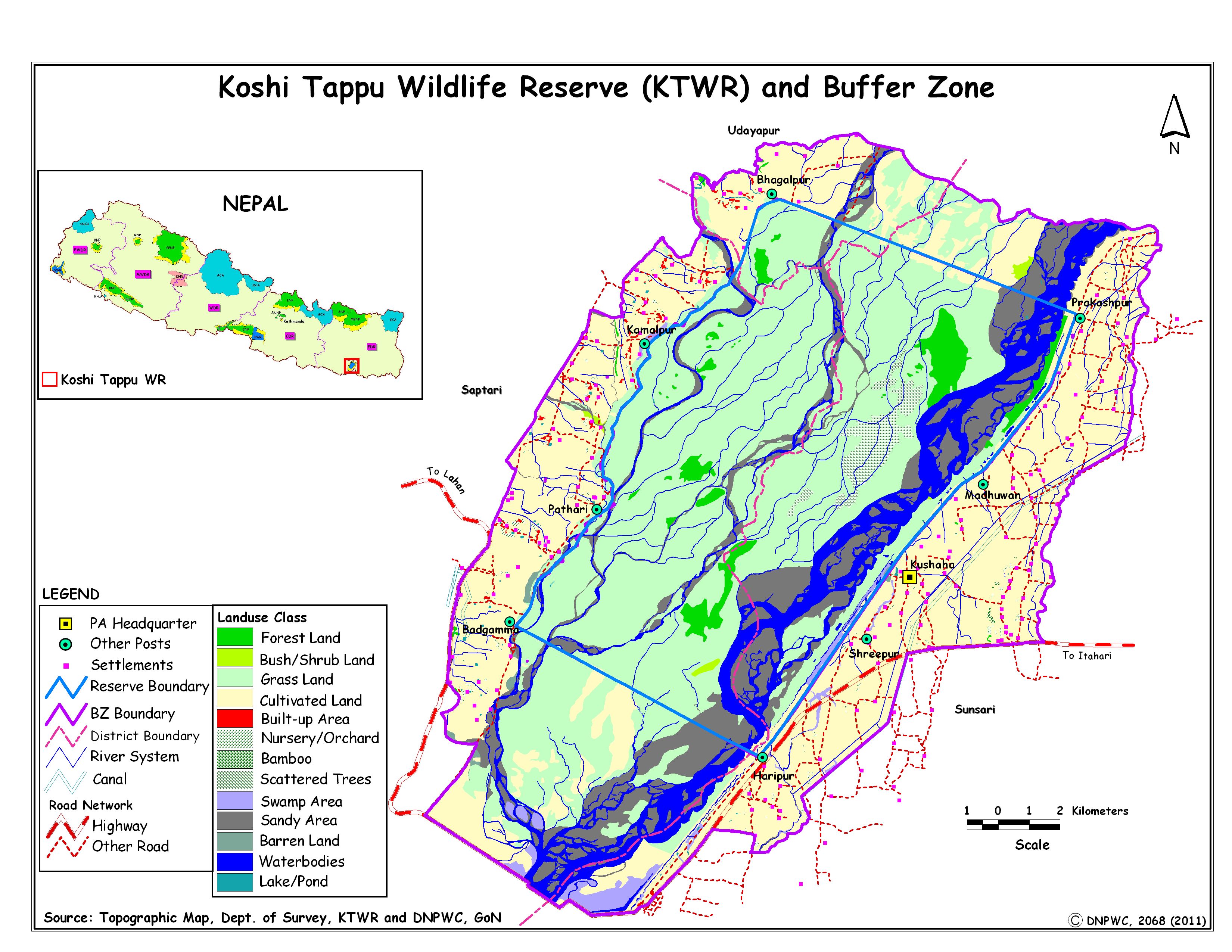 Koshi Tappu Wildlife Reserve lies on the floodplains of the Sapta Koshi River in the south-eastern Terai. The reserve was gazetted in 1976 to preserve habitat for the only remaining population of Wild buffalo, Arna (Bubalus arnee). The 176 sq. km. reserve is Nepal's smallest wildlife reserve. The eastern and western embankments of the Sapta Koshi River define the area. In 1987, Koshi Tappu was declared a Ramsar site, a wetland of international significance. Government of Nepal has declared the buffer zone ( 173.5 sq. km ) surrounding the reserve in 2004.

Features: The Sapta Koshi is one of the three main tributaries of the Ganges- Rapid and intense flooding of the reserve, occur during the rainy season. Embankments have been constructed parallel to the river to control the flooding.

Climate: The reserve experiences three distinct seasons. Summer (February through May) is intensely hot with minimum precipitation. Shade temperatures can reach 40 c. The monsoon starts in late May/early June and lasts until September bringing heavy frequent rainfalls. The rainfall is greatest during July but high humidity and temperatures are experienced throughout the season. Winter (October through January) is characterized by clear skies and moderate temperature, but can still get quite cold.

Flora and Fauna: The vegetation is mainly composed of tall grasslands. Local villagers are permitted to collect thatch grass once a year. These are used for roof thatching and building house walls. There are also small patches of Khair-sissoo scrub forest and deciduous mixed riverine forest.The reserve has important habitat for a variety of wildlife. The last surviving population of Wild buffalo is found here. The estimated population of wild buffalo is around 159 individuals is dwindling. They are distinguished from domestic buffalo by their much bigger horns. The reserve is also home to around 20 other animal species such as Hog deer ,Wild boar , Spotted deer, Blue bull, and Rock Python.
Around 441 species of birds-many seen now here else in Nepal (14 endemic species)- have been recorded, including 20 duck species , 2 Ibis species, white tailed stonechat , Striated marsh warbler, 30 shore birds, 114 water birds, and the endangered swamp partridge and Bengal florican. The Koshi Barrage is an extremely important resting place for many migratory birds, containing 87 winter and trans-Himalayan migratory species. The Koshi River is home to 80 species of fish. The endangered Gharial crocodile and Gangetic dolphin have been recorded in the river as well. During winter, many of the migratory birds can be seen on the Koshi Barrage and on the river channel. Migration usually peaks around mid March. Much wildlife visits these areas during dusk and dawn. The clear skies allow for beautiful sights of several Himalayan peaks including Makalu (8463m), the world's fifth highest peak.Visitors can arrange elephant ride from Reserve Headquarters