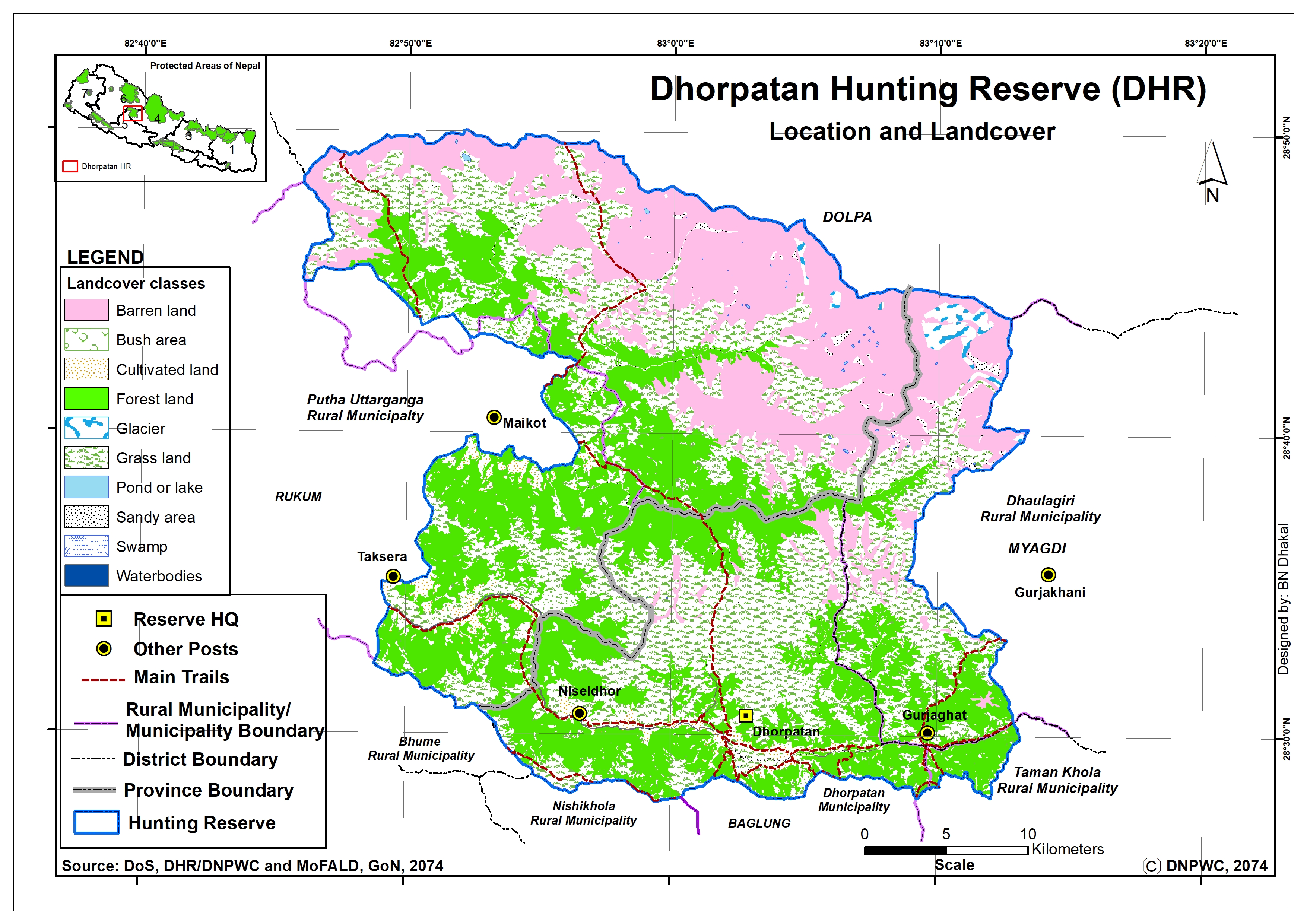 Dhorpatan Hunting Reserve Adjoins, Rukum, Myagdi and Baglung District in the Dhaulagiri Himal range in West Nepal. Putha, Churen and Gurja Himal extend over the northern boundary of the reserve.
Dhorpatan Hunting Reserve was established in 1983 and was gazetted in 1987. Management objectives of the reserve allow sports hunting and preserve a representative high altitude ecosystem in West Nepal.

Features
The reserve extends over an area of 1325 sq.km. and is the only hunting reserve in the country to meet the needs of Nepalese and foreign hunters of blue sheep and other game animals. The higher elevations remain snow-capped throughout the year. Altitudes vary from 3000 m to more than 7000 m. The Flat meadows above tree line (4000m.), locally known as patans, are important for animals like the blue sheep and other herbivorous animal. The reserve is divided into six blocks for hunting management purposes.
The reserve is surrounded by villages on all sides except the north. Local people depend on the reserve to meet their requirements of timber, fuelwood, fodder, and pasture.
Every year livestock grazing activities begin from February and last until October. More than 80,000 livestock enter the reserve for grazing.
The majority of people belongs to the Mongoloid race, including Magar, Thakali and gugung. Amalgamation of different ethnic groups has resulted in mixed pattern of clultures.

Vegetation
The reserve is characterized by alpine, sub-alpine and high temperate vegetation. Common plant species include fir, pine, birch, rhododendron, hemlock, oak, juniper and spruce. Pasturelands occupy more than 50% of the total area of the reserve at higher elevation.

Wildlife
The reserve is one of the prime habitats for blue sheep, a highly coveted trophy. Status survey on blue sheep conducted by DNPWC on 2007 revealed that the reserve has 852 blue sheeps. Other animals found are : leopard, goral, serow, Himalayan tahr, Himalayan black bear, barking deer, wild boar, rhesus macazue, langur and mouse hare. The resrve is home to 137 sps of birds. Pheasants and partridge are common and their viable population in the reserve permits controlled hunting.
Endangered animals in the reserve include Musk deer, Wolf, Red panda, Cheer pheasant and Danphe.
The hunting license is issued by the Department of National Parks and Wildlife Conservation.

Climate
The monsoon lasts until the beginning of October. Day time temperature is very low during winter due to strong winds. Higher elevation remain covered with cloud in the morning, later clouds are cleared by the wind. Snow may occur even at low elevation until early April,   however, it soon melts. The best time to visit the reserve is March-April.

Places of Interest
Dhorbaraha, a Hindu religious place on the banks of Uttarganga River near Dhorpatan, lies in Fagune block. Every year on the day of "Janai Purnima" in August, a religious fair is held here which is attended by many local devotees. The magnificent view of Dhaulagiri Himal from Barse, Dogari and Gustang bocks are exceptional. Seng and Sundaha block are rich in wild animals.

Facilities
Local people are allowed to collect limited quantities of fuel-wood for their home use. Visitors are requested to be self-sufficient with fuel (Kerosene/gas) before entering the reserve.
How to get there
Public bus service is available from Kathmandu to Burtibamg via Baglung Bazaar and other route via Tansen-Tamgash Gulmi also. Similarly, visitors can reach by foot from Beni, Myagdi to Dhorpatan within 3 days normal walk.
Chartered service helicopter may be available on request from Kathmandu and Pokhara