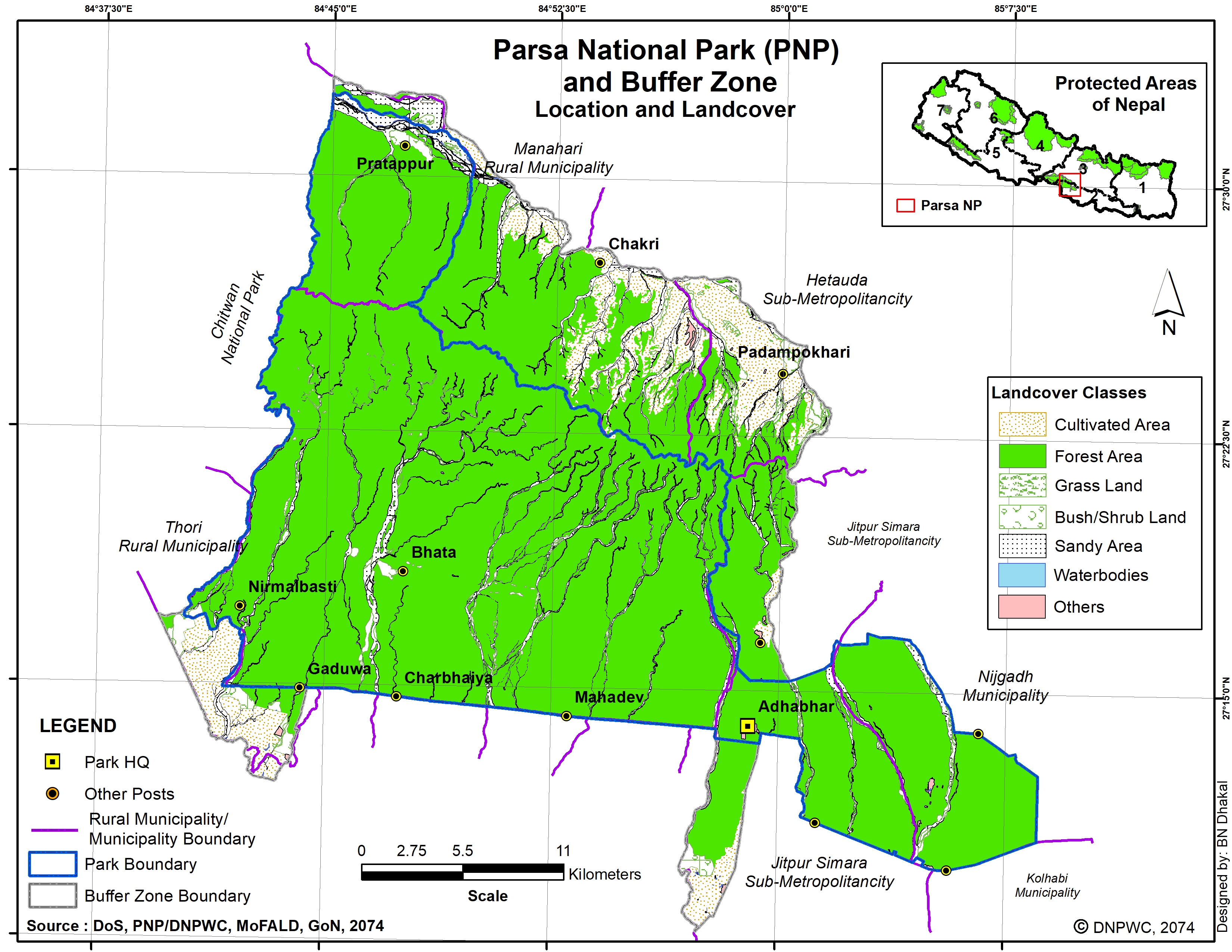 Description:
Parsa National Park is located in the south-central lowland Terai of Nepal. With the area of 637.37 sq.km. it has pristine sub-tropical jungle. In history, this area served as a vacation site for the Rana Rulers of the country. In 1984, it has been gazetted as a wildlife reserve to preserve the habitat for wild Asian elephant and a variety of other fauna. It is contiguous with Chitwan National Park in the west. In 2017 it was gazetted as National Park.
Additional Information

Features: The soil is primarily composed of gravel and conglomerates, making it susceptible to erosion. The hills present a very rugged face with numerous gullies and dry streambeds. As the foothills are very porous, water flows underground and surfaces at a distance of about 15 km. from the hills base. The Churia hills range from 750m to 950m running east to west.
Climate: Winter (October-December) provide pleasant temperatures with clear skies. Nighttime temperatures can drop to 0°C. During spring (January-March) temperatures rise and water becomes scarce. During summer (April-June) the days become hot and humid with temperatures rising up to -40°C. Monsoon (July-September) brings cooling rains.

Flora & Fauna: The forests are mainly composed of tropical and subtropical species. Sal forests compose about 90 percent of the reserve's vegetation. Along the banks of the rivers, riverine forests are found containing species like Khair and Silk cotton tree. In the north-eastern part of the reserve, at higher altitudes, Sal and Pine forests are occurring. On the southern slope of the Siwalik hills, the forests are dominated by pine. Sabai grass is commercially important species, grows well on the southern face of the Churia hills. The reserve supports good populations of various endangered species include wild Asian elephant, Royal Bengal tiger, Sloth bear, and Leopard. Blue bull, Sambar, Chital, Hog deer, Barding deer, Langur, Rhesus macaques, striped hyena, Jungle cat, and Palm civet are also found in the reserve. The reserve also provides habitat for more than 500 species of birds. For example White breasted kingfisher, Paradise flycatcher, Large racquet-tailed drongo, Golden backed woodpecker, etc are some of the common sights. Giant hornbill, one of the endangered bird species is found in some forest patches. The reserve is also famous for reptiles and different kinds of snakes include common Cobra, Common and banded Karit, Python and King cobra.

Facilities: There is a small guesthouse with four rooms at the headquarters. There is also a teahouse that can provide tea, snacks, and Nepali food. Hetauda and Birgunj are about an hour's bus. Make sure to bring a first-aid kit containing medicines for intestinal problems.
Near the headquarters there is a machan (view tower) that provides excellent opportunities to catch glimpses of many birds, deer and leopard. Wild elephants could be also sighted form the machans. Kailas Bhata is atop a hill, and is of religious importance. It house two small temples (Dugdeswor Mahadev) paying homage to the Hindu gods of Shiva and Parbati. Also, one can look over the lush forests of the Terai from here. An elephant camp is located near the Amlekhgunj in Bara district. Jungle rides can be arranged from the park headquarters, which is the best way to get a close view of the wildlife.

How to get there: The park is easily accessible. The Kathmandu - Hetauda - Birgunj highway passes by the entrance gate. Bus can be taken from Kathmandu. It takes six to seven hours to get there. A flight to Simara takes about 20 minutes. There is a 15 minutes bus, ride to the park headquarter.