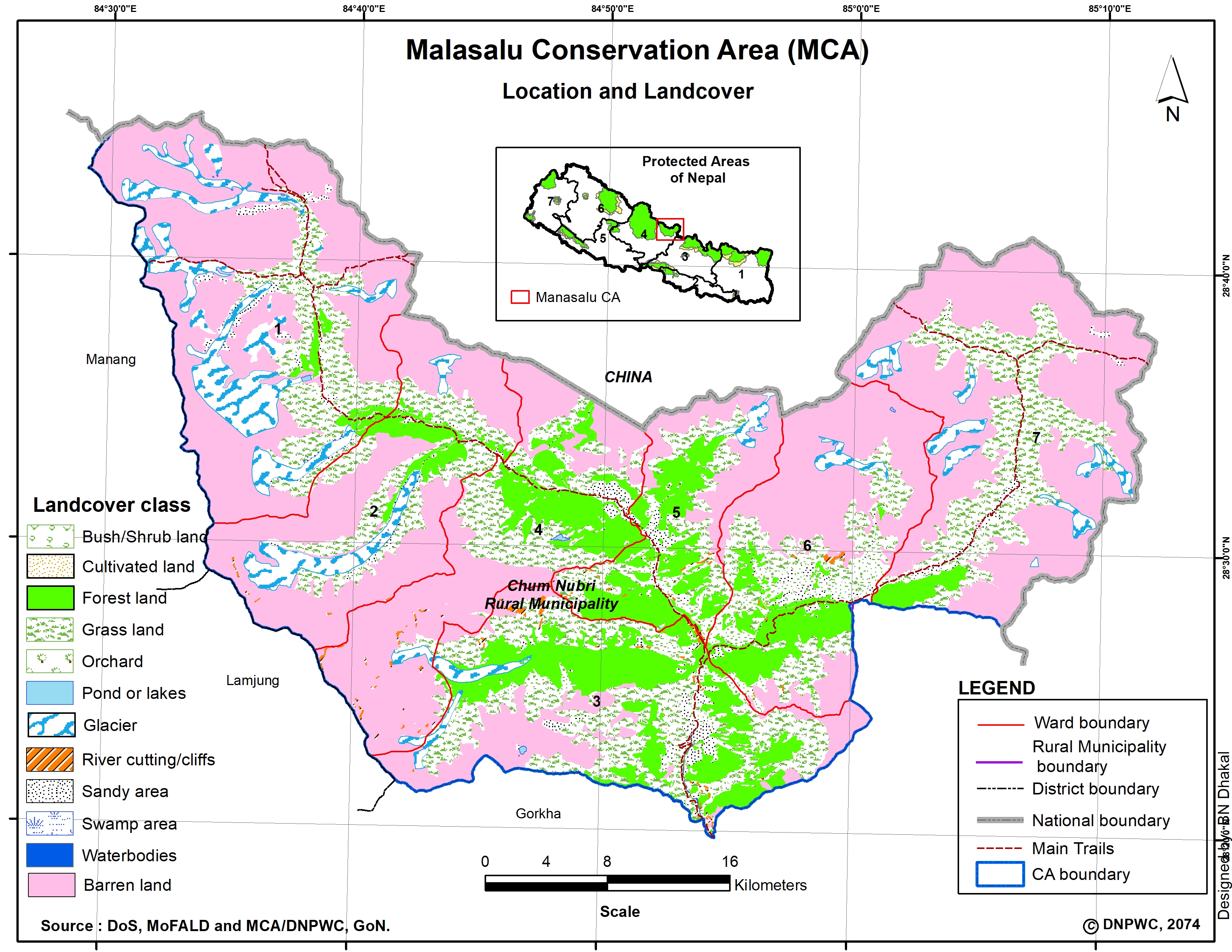 Description:
Manaslu has been declared as conservation area in 1998 by the government of Nepal. It covers an area of 1663 sq. km. The area harbors a mosaic of habitats that inhabits 33 species of mammals, 110 species of birds, 11 species of butterflies and 3 species of reptiles. There are approx. 2000 species of plants, 11 types of forests and over 50 species on useful plants. The bio-climatic zones vary from sub-tropical to Nival. The altitude rises from a mere 600m. to the summit of Mt. Manaslu (8,163), the eighth highest peak in the world.

Additional Information
Climate: The Manalsu region from Arughat to Larkhe La (Pass) has six climatic zones : tropical ,subtropical ,temperate, subalphine, alphine, and arctic.The extreme climatic variations within 100 km. trail between Arughatand to Samdo are associated with tremendous differences in elevation ,topography and precipitation. The tropical climate zone lies in the low river basins of the Budhi Gandaki ,Marsyangdi and other rivers, lowland valleys and lower hills below the elevation of 1000 m. A subtropical climatic zone exists between 1000m and 2000m, where the average summer and winter temperature range between 31 to 34oC and 8 to 13oC respectively. The temperate climatic zone lies at higher mountains above 2000 m and below 3000m. In this zone ,summer temperatures range 22 to 25oC and winter temperatures range from -2 to 6oC. Frosts and snowfall are common during winter (January and February).The subalphine climatic zone lies between 3000 m and 4000 m, where snowfall occurs for about four to six months (December to May). In this zone ,winter is very cold and even in summer the temperature is not high with a mean annual temperature of 6 to 10oC .The alphine zone between 4000 and 5000 m is mostly open meadows. The arctic climatic zone lies at elevations above 4500m. The snow line is at about 5000 m. Precipitaiton is in the form of snow and the temperatures drop far below freezing. The monsoon occurs between June and September providing about three -fourths of the total rainfall. The post-monsoon period (October to November) and the winter months (December to February) are usually dry. The average rainfall is around 1900 mm per annum. In general ,the southern part of the region remains more cloudy and wetter than the upper sub-alpine areas and alphine areas.

How to get there: The trek starts from Gorkha, home of the legendary Gorkha soldiers, and follows the meandering Budhi Gandaki river or the Darundi river before reaching Larke Pass (5,106 m.) and crossing over into Manang district of Annapurna Conservation Area.

Vegetation: The vegetation of the area can be divided into three main categories, based mainly on the altitude, viz. Low hill, Middle mountain, and High mountain types. Each category has its own type of dominant forests and other associated species. The types of vegetation, however, tend to overlap the adjoining ones at places especially in relation to aspect and micro-climate. While the forest types are quite distinct, the underlying as well as adjoining flora in different forest types do not vary so sharply. This is especially true in cases of many Non-Timber Forest Products including medicinal herbs and aromatic plants, many of which have large encountered in different forests types and adjoining vegetation. The presence of 19 types of forests and other forms of dominant vegetation have been recorded from the area