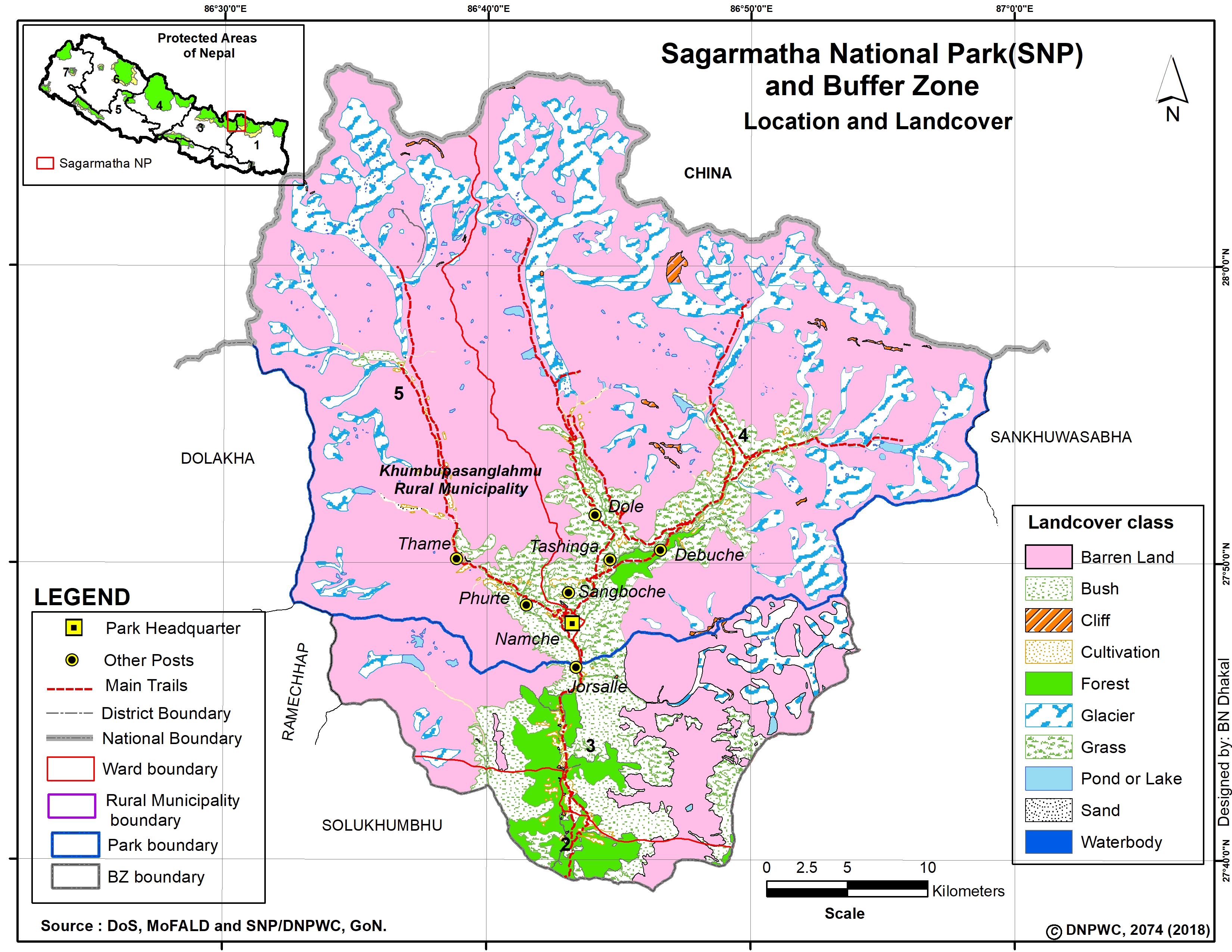 Sagarmatha (Mt. Everest) National Park is spread over an area of 1,148 sq, km in 1976, of the Himalayan ecological zone in the Khumbu region of Nepal. The Park includes the upper catchments areas of the Dudhkoshi and Bhotehoshi Rivers and is largely composed of rugged terrain and gorges of the high Himalayas, ranging from 2,845m at Monjo to the top of the world's highest Himal - Sagarmatha at 8,848m above the sea level. Other peaks above 6,000m are Lhotse, Cho Oyu, Thamserku. Nuptse, Amadablam and Pumori, The famed Sherpa people, whose lives are interwoven with the teachings of Buddhism, live in the region. The renowned Tengboche and other monasteries are common gathering places to celebrate religious festivals such as Dumje and Mane Rumdu. In addition to Tengboche, Thame, Khumjung and Pangboche are some other famous monasteries. For its superlative natural characteristics, UNESCO listed SNP as a World Heritage Site in 1979.

Flora and Fauna: The vegetation found at the lower altitude of the park include pine and hemlock forests, while fir, juniper, birch and rhododendron, scrub and alpine plant communities are common at the higher altitude. The park is home to the red panda, snow leopard, musk deer, Himalayan tahr, marten, Himalayan mouse hare (pika) and over 118 species of bird including the Impeyan pheasant, snow cock, blood pheasant, red billed cough etc.

Buffer Zone: Government of Nepal has declared a buffer zone in and around the park in 2002 with the objective of reducing biotic pressure in the slow growing vegetation. The government has also made a provision of plowing back 30 - 50 percent the revenue earned by the park to community development activities in the buffers zone. In collaboration with local people it aims to conserve biodiversity in the region. Popular Trekking Routes The trek from Namche to Kala Pathar is very popular. The Gokyo Lake and Chukung valleys also provide spectacular views. The Thame Valley is popular for Sherpa culture while Phortse is famous for wildlife viewing. There are some high passes worth crossing over. However, the trekkers must have a guide and proper equipment for the trek.