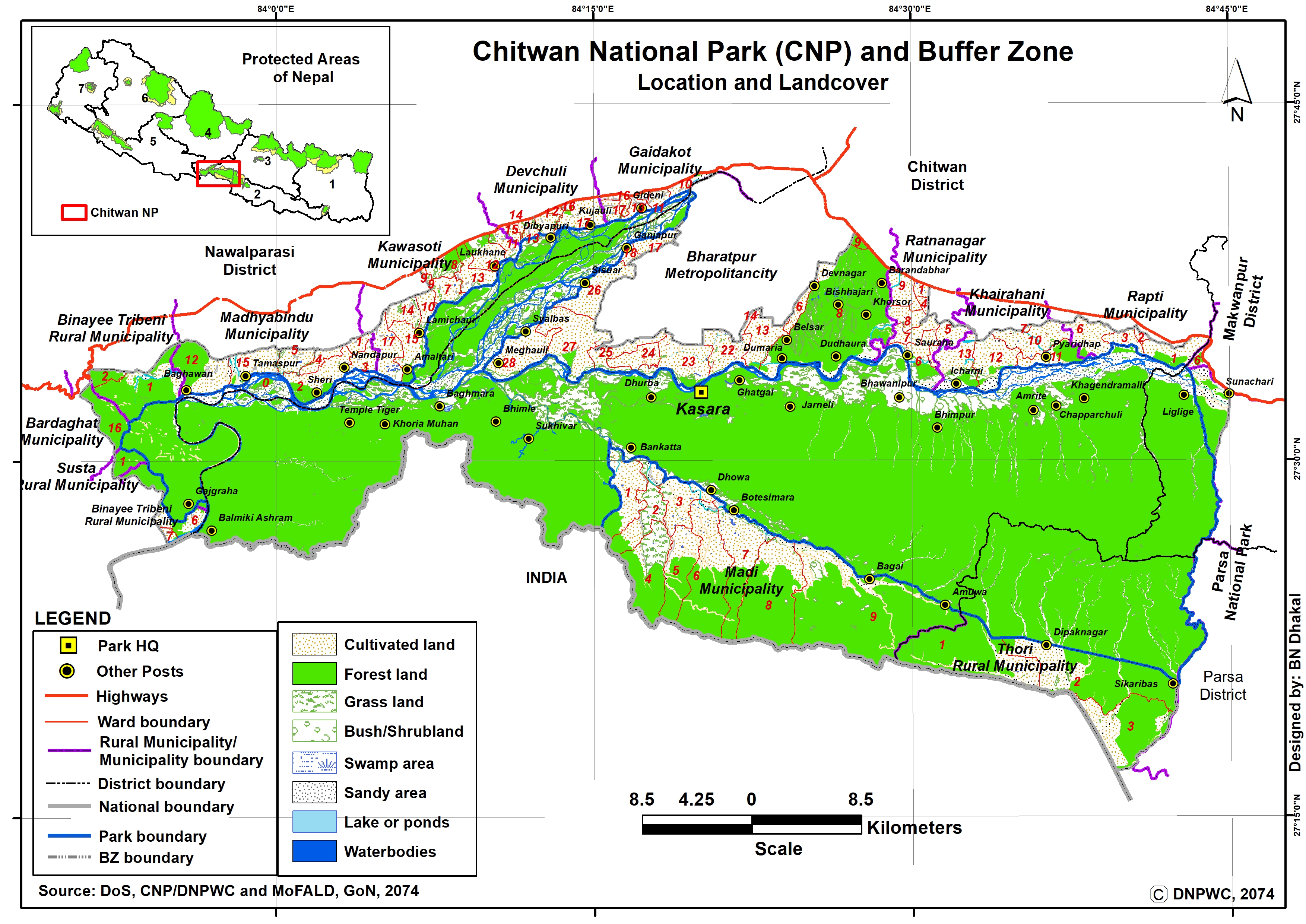 The park is situated in south central Nepal, covering 952.63 sq. km.. in the subtropical lowlands of the inner Terai. The area comprising the Tikauli forest-from Rapti river to the foothills of the Mahabharat-extending over an area of 175 sq.km. was declared Mahendra Mriga Kunj (Mahendra Deer Park) by the late King Mahendra in 1959. In 1963, the area south of Rapti River was demarcated as a rhinoceros sanctuary. The area was gazetted as the country's first national park in 1973, recognizing its unique ecosystems of international significance. UNESCO declared RCNP a World Heritage Site in 1984,In 1996 an area of 750 sq.km. surrounding the park was declared a buffer zone, which consists of forests and private lands including cultivated lands. The park and the local people jointly initiate community development activities and manage natural resources in the buffer zone. Government of Nepal has made provision of to provide 30-50 percent of the park revenue for community development and natural resource management in the buffer zone.

Features: The park consists of a diversity of ecosystems-including the Churia hills, Ox-bow lakes, and the flood plains of the Rapti, Reu and Narayani Rivers. The Churia hills rise slowly towards the east from 150 m. to more than 800 m. The western portion of the park is comprised of the lower but more rugged Someshwor hill. The park shares its eastern boundary with the Parsa Wildlife Reserve.

Climate: The park has a range of climatic seasons each offering a unique experience. October through February with average temperatures of 25 oC offer an enjoyable climate. From March to June temperatures can reach as high as 43oC, The hot humid days give way to the monsoon season that typically lasts from late June until September, Rivers become flooded and roads are impossible. In late January, local villagers are allowed to cut thatch grasses to meet their needs, which offers a better viewing of wildlife to visitors. September ,November , February and April, migratory birds join the residential birds and create spectacular bird watching opportunities. While the monsoon rains bring lush vegetation, most trees flower in late winter. The palash tree, known as the "flame of the forest' and silk cotton tree have spectacular crimson flowers that can be seen from a distance.

Flora & Fauna: The Chitwan valley consists of tropical and subtropical forests. Sal forests cover 70 percent of the park. Sal leaves are used locally for plates in festivals and religious offerings. Grasslands cover 20 percent of the park. There are more than 50 different types of grasses, including the elephant grass (Saccharum spp ), renowned for its immense height. It can grow up to 8m in height. The park is home to more than 50 mammal species, over 525 birds, and 55 amphibians and reptiles. The endangered fauna found in the park are: One-horned rhinoceros, Gaur. Royal Bengal tiger. Wild elephant, Fourhorned antelope, Pangolin, Golden monitor lizard, Python, etc. Bengal florican. Lesser florican, Giant hornbill, Black stork, While stork, etc.

Facilities: The display at the visitor centre at Sauraha provides fascinating information on wildlife and conservation program. The women's user groups' souvenir shop offers a variety of handicrafts and other local products for gifts and souvenirs. Elephant safari provides opportunity to get a closer view of the endangered one-horned rhinoceros. One may also get a glimpse of the elusive Bengal tiger. The Elephant Breeding Center at Khorsor, Sauraha gives you information on captive elephant and the calves born there. The museum at Kasara, the park headquarters, has informative displays- Near the HQ visitors can see Bikram Baba, a Hindu religious site of archival value. A short walk (1km) from the park HQ will take you to the Gharial Breeding Center, which is also home to the Marsh mugger and number of turtles. Inside the park, there are 7 resorts run by park concessionaires that can provide lodging and access to wildlife activities. Various resorts and lodges situated outside the park also offer variety of services.