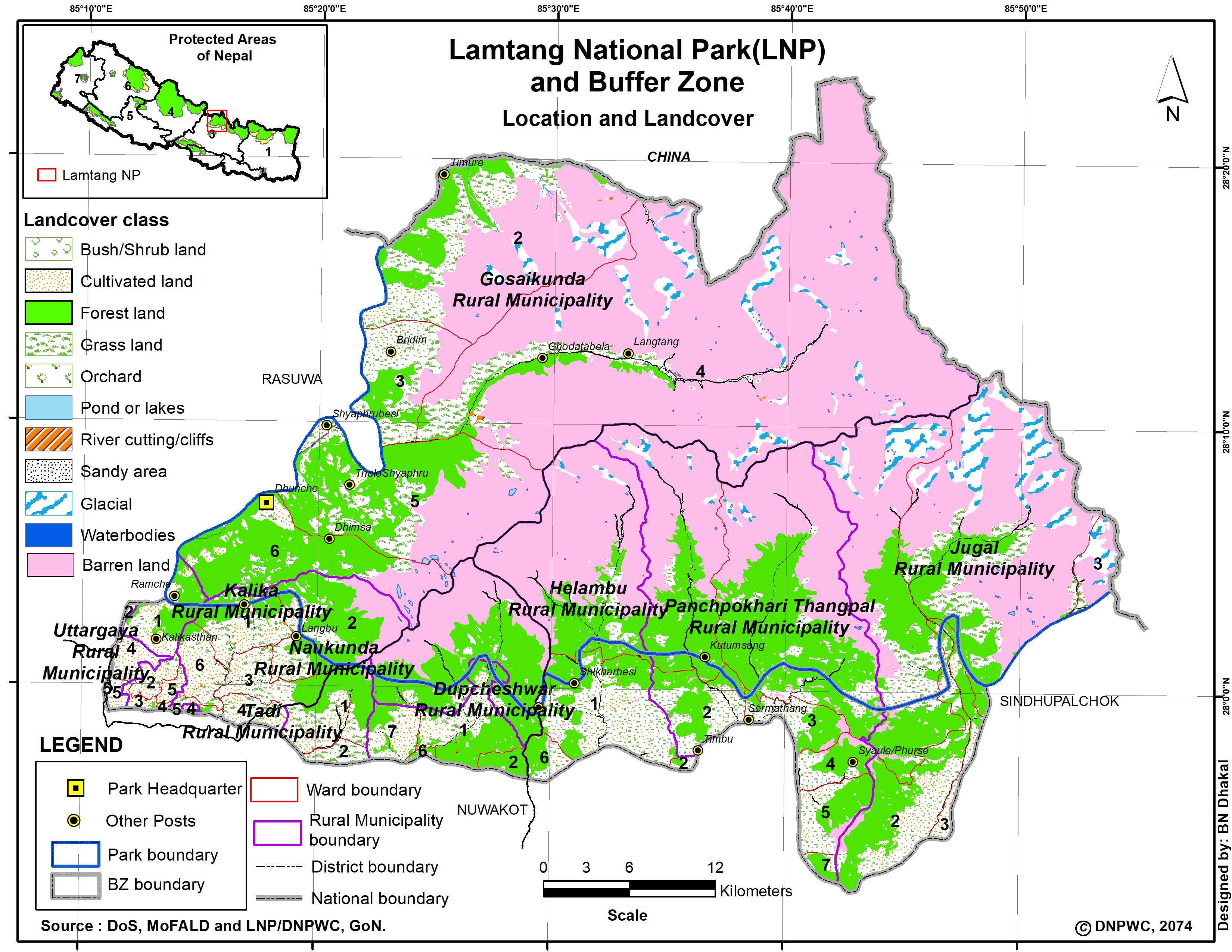 It was established in 1976 to conserve the unique flora and fauna of the region. It is the nearest national park of the capital Kathmandu in the Central Himalayan Region. The 1710 sq. km. of the park extends over parts of Nuwakot, Rasuwa, and Sindhupalchok districts in the southern mountainous terrain of the Nepal-China (Tibet) border. In 1998 an areas of 420 sq. km in and around the park declare as a buffer zone. The park represents a meeting point between indo-Malayan and Palearctic realms, and holds a rich biodiversity. Buffer zone management is a joint venture between the park office and the local communities. Local communities have a decision-making role in the management of such areas. Additionally, the local communities or the BZ receive 30 to 50 % of the park revenue for the better management of natural resources to ensure a sustainable supply of resources and community development

Climate: September through May offers a variety of natural splendors, from lush temperate river valleys with screeching langur to spectacular old growth forest and glacial-craved cliffs rimmed by snow-covered peaks. The weather is also relatively dry except January-February when one may come across snow.Autumn is the best time to visit the Park. By April bursts of red, pink, and while rhododendrons stretch into towering canopies of fir and oak forests. Advent of warm weather makes the Yak and Chauri herds ascend to higher elevation, making occasional camps in the pasturelands, to follow years of tradition. From June to august, skies are heavy with monsoon rains. During August, a lively festival at Gosaikunda Lake attracts thousands of Hindu pilgrims and September witnesses’ spectacular display of wild flowers, while livestock herds, once again, return to lower pastures

Flora and Fauna: Sub-tropical vegetation characterized by Sal (Shorea robusta) forest in the southern section of the park is gradually taken over by hill forest (2000-2600m) consisting of Chirpine, Rhododendron, and Nepalese alder. The temperate zone (2600-3000m) is covered mainly by oak forest fading to old growth forest of silver fir, hemlock, and larch in the lower sub-alpine zone (3000-3600m). The Nepalese larch (larixnepalensis), the only deciduous conifer in the region, is found in this park and few places elsewhere. Throughout these zones different species of Rhododendron such as R. arboretum, R. barbatum, R. campanulatum, and R. lepidotum (scrubs) to name a few, form a colorful under story. Tree species such as birch, silver fir, Sorbus microphyla and twisted Rhododendroncampanulatum are found near the tree line. It is here at 4000m Juniper and Rhododendron shrubs (R. anthopogon) slowly dissolve into expansive alpine grassland meadows. Langtang's expansive high meadows provide summer habitat for numerous ungulate species such as musk deer and Himalayan tahr. The park is also well known for its populations of red panda, Himalayan black bear, snow leopard, wild dog, ghoral, serow and more than 250 species of birds.

Places of interest: Three main trek routes; 1) Langtang Valley, 2) Helambu and 3) Gosaikunda Lake cover much of the Langtang National park and the southern Helambu region. Langtang and Helambu regions are connected through Lauribina La. All routes have the facilities of locally operated hotel/lodge, teahouse, and campgrounds for groups. The park offers a choice of moderate to more difficult hiking with duration ranging from 3 days to 3 weeks. Lodges operate year round except during the peak winter when the trails are blocked. Trekkers who take extra time to explore trailside wilderness (e.g. near Ghora Tabela and Kyanjin) hill top view point (Kyanjin), and cultural sites (notably in Langtang village and Melamchighyang. Tarkeghayang and Shemathang) will be well rewarded. One has to be self sustaining to venture remote areas of the Park such as Panch Pokhari (five lakes), east of Helambu, the toe of Langshisa glacier, and upper level valley from Kyanjin: and over the challenging Ganja La pass in upper Langtang Valley.

Acclimatization and Safety: High altitude Sickness (HAS) can be life threatening if elevation is gained too rapidly without proper acclimatization. Medical doctors advise against ascending more than 400m a day once above 3000m elevations. Alternatively, one can spend an extra night at 3000m and 3500m before ascending higher. Over exertion and dehydration contribute to HAS. Drink at least 3-4 litters of water everyday besides tea and coffee which act as diuretics. Watch the health of your companions and porters. Symptoms of HAS are headache, dizziness, trouble in breathing and sleeping, loss of appetite, nausea and general fatigue. If someone develops HAS symptoms, take the person to lower elevation immediately. The Langtang-Helambu trails are rocky and slippery after rain or frost. Watch out for falling rocks while crossing landslides but do not stop. Never hike alone. Hiring local guides is strongly recommended on Ganja La (5120m) trek and on Lauribina La (4600m) during winter. Carrying acomprehensive first-aid kit is advisable as there are no medical facilities out of Dhunche. Telephone facilities are available at Singh Gompa and at major settlements in Helambu