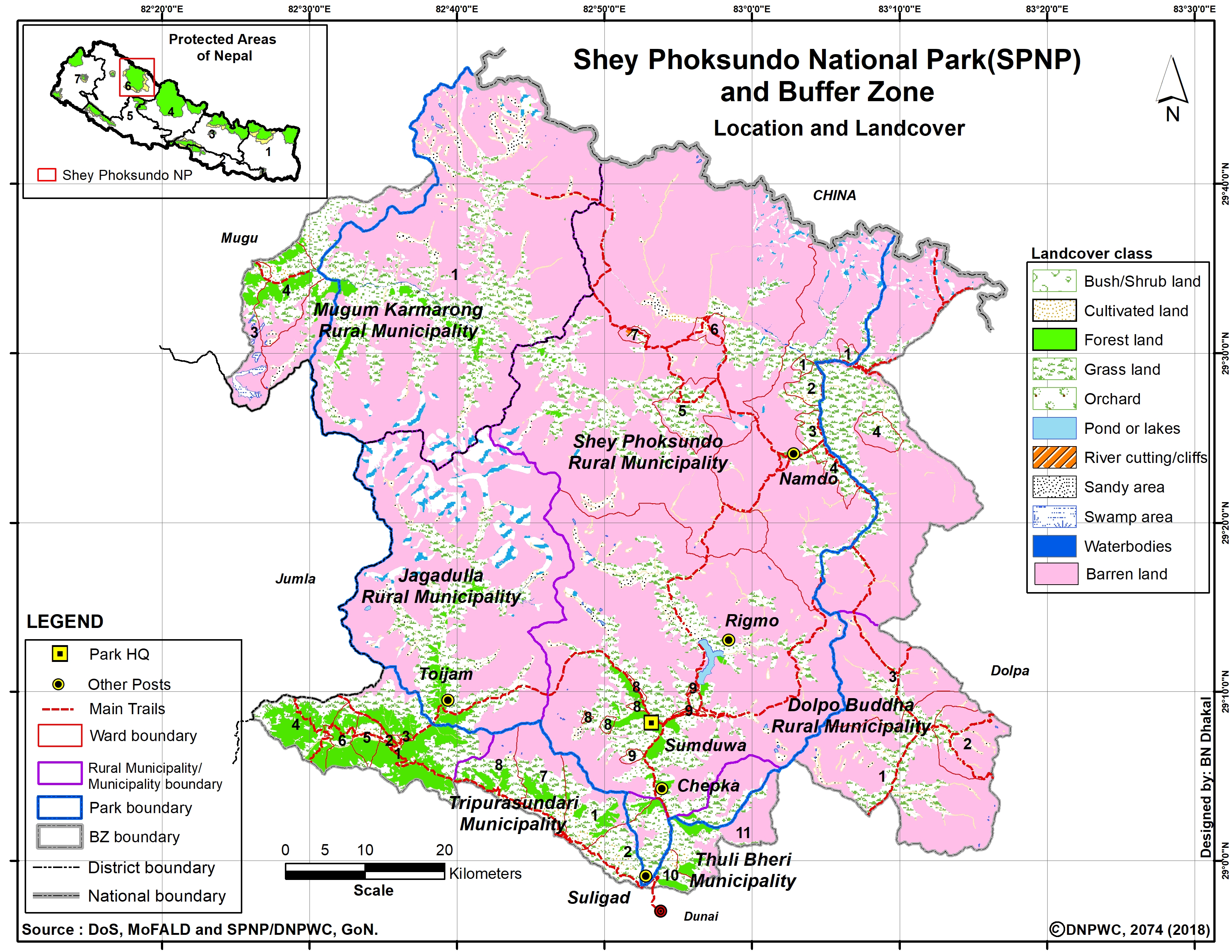 Shey-phoksundo National Park is situated in the Trans-Himalayan region of northwest Nepal. It is Nepal’s largest National Park covering an area of 3,555 km2. It was established in 1984 to preserve a unique Trans-Himalayan ecosystem with a diversity of flora and fauna. The Park’s climatic differences, altitude variations, and different zoo-geographical regions support a diverse range of biotic systems. In 1998, an area of 1349 km2 surrounding the park was declared as buffer zone, which consists of forests and private lands. The buffer zone is jointly managed by the park and local communities. Together they initiate community development activities and manage the natural and cultural resources.

Features: Shey Phoksundo National Park provides a diversity of spectacular landscapes. Elevations in the park range from 2,130m in Ankhe to 6,883m at the summit of Kanjiroba Himal. Much of the park lies north of the Himalayan crest. Nepal’s deepest and second largest lake, Phoksundo Lake, lies in upper regions of Suligad. Near the lake’s outlet is the country’s highest waterfall. The major rivers in the park are the Khung, Nmajung and Panjang, The Suligad and Jugdual Rivers, which are the major tributaries of the Thuli Bheri River; and the Langu Rilver, which drains the high dolpo plateau to the east and flows westward. Phoksundo Lake is famous for its magnificent turquoise color and te spectacular scenery clearly rank it with the most scenic mountain parks in the world. Ringmo village, a typical Tibetan village, is scenically nestled in the area. Many beautiful glaciers can be found near and above the lake area. The Park contain many Gompas (Monasteries) and religious area. The most famous, Shey Gompa was established in the 11th Century. Thashung Gompa located near Phoksundo Lake was built about 900 years ago to conserve wildlife.

Climate: As a result of its spanning both the northern and southern aspects of the Himalayan crest, the park experience a wide climatic range. Most of the precipitation in the area occurs during the monsoon (July-September), although the Dhaulagari and Kanjiroba Ranges from a massive barrier preventing most of the rain from reaching the Trans-Himalayan area. The park contains the transition form a monsoon dominated climate with 1500 mm.of annual precipitation in the south (Suligad) to an arid climate with less than 500 mm. a year in the northern slopes. Winters are quite severe, with frequent snowfalls above 2,500m. and temperature’s remaining below freezing above 3,000m. through much of the winter.

Flora & Fauna: The flora found within the park is extremely diverse. The northern regions contain barren areas of the upper Himalayas and the Trans-Himalayan slope lands consisting of some rhododendron, caragana shrubs, and Salix, Juniper, white Himalayan birch, and the occasional silver fir dominate the high meadows of the Himalayas. Less than five percent of the park is forested, with much of it lying in the southern portion. The Suligad Vally’s flora consists of blue pine, spruce, hemlock, cedar, silver fir, poplar, rhododendron, and bamboo. The park also contains 286 species of ethnobotanical importance. The park provides important habitat for endangered species including the snow leopard, grey wolf, musk deer, and blue sheep, goral, great Tibetan sheep, Himalayan tahr, leopard, jackal, and Himalayan black bear are also found in the park. The park is home to six reptiles and 29 species of butterfly, including the highest flying butterfly in the world, Paralasa nepalaica. The park provides habitat for over 200 species of birds, among which include yellow-throated marten, Tibetan partridge, wood snip, white-throated tit, wood accentor, and crimson-eared rosefinch.

How to get there: The easiest way to reach the park is by air from Nepalgunj to the Juphal airstrip in Dolpa followed by a half day walk to the park entrance at Suligad.

Culture: The park is home to more than 9,000 people and their villages area among the highest settlements on Earth. Most of the inhabitants of the park practice Bon Buddhism, an ancient religion with roots in Animism and Buddhism. The Bon-po religion, which forms the entire cultural base for Tibetan Buddhism, was founded 18,000 years ago, during the Zhang Zung Empire of today's western Tibet. The landscape is dotted with sacred monasteries, thangka paintings, and chortens. he local community is heavily dependent on trade with Tibet and agriculture. This area is also famous for its salt trade caravans.

Trekking: Individual trekking is permitted to trek to Ringmo or Phoksundo Lake. The Tran-Himalayan region of inner Dolpa is restricted to group trekking only, A group trekking permit is needed and can be arranged through any recognized trekking agency of Nepal.